The long branches of history stretched far away through time and across the channel to Normandy in medieval France, when the very first Billy Bear sailed to Britain as standard ‘Bearer’ to William the Conqueror in 1066.  His family name was Giffard, which roughly translated from the Norman French as ‘Chubby Cheeks’ and was a fair reflection on his lovable and kindly face! 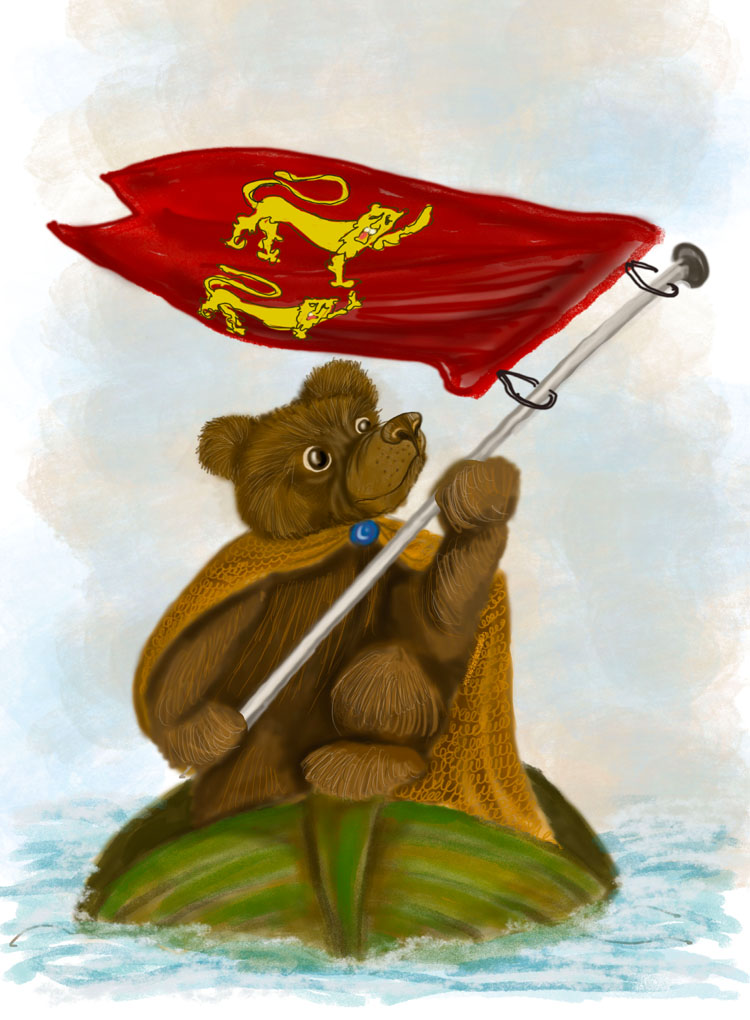 After the Battle of Hastings, the Billy Bears made their new homes across the Channel and the hundreds of acorns which the very first Billy Bear had stuffed into the pockets of his cloak for sustenance as he set sail with William the Conqueror, were planted and became the ancestors of the great Oak trees you can find today in the Royal Parks and Forests of the UK.

The Billy Bears continued through history to be the ‘furry’ guardians of the Regal line.  The next time they make an appearance on the stage of History is over four centuries later when a Tudor branch of the family were living happily in an oak tree deep in the parkland of Hatfield House.  It was a great, gnarled Oak whose branches stretched far with a deep canopy of lush green leaves for protection, but this mighty tree had grown up from one of the original acorns that came across the Channel with the very first Billy Bear in 1066! 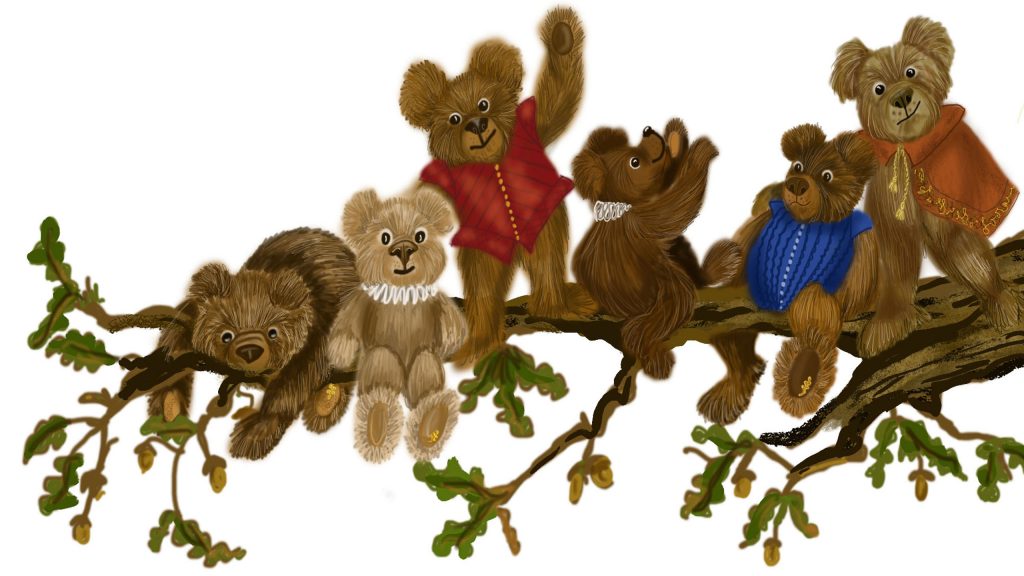 The Billy Bears felt it was going to be a special day and that the princess with the fiery red hair who rode her horse in the park and took her rest under the branches of their treetop home, was going to get some momentous news.  Her name was Elizabeth, and she was in the habit of using the shade and protection of their great oak tree for a sneaky snooze after her ride.

She would settle down in the shade of the tree, munching on a handful full of candied violets, (her very favourite sweets) and then she fall into a deep sleep with snores so loud it would shake the branches over the Billy Bears heads!  What would happen if she slept through and missed her own accession to the throne? 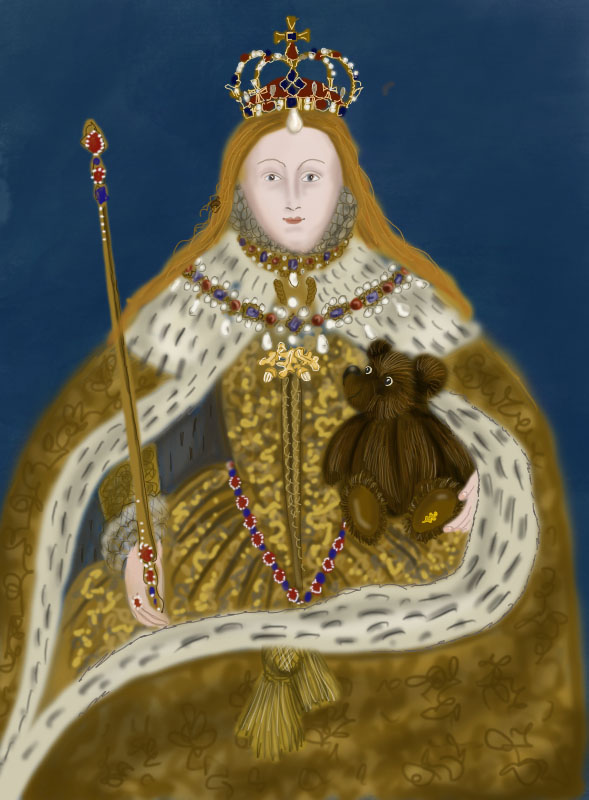 The Billy Bears had an idea – as they watched the horsemen in the distance riding up to tell the princess that she was now Queen, they gently dropped their acorns on her sleepy head.  Elizabeth snuffled and snorted, woke up and shook the Billy Bears acorns out of her flaming red hair which shone golden in the autumn sunshine.  She stood and managed to gather herself up into a regal pose just in time to hear the horses’ hooves approaching and receive her courtiers who came bearing the great news.  The horsemen dismounted, and as they knelt before their new Queen and kissed her hand, Elizabeth looked up into the branches above her head and she saw the twinkling, black beady eyes and chubby cheeks of the Billy Bears as they smiled and looked down.  She winked back at them her thanks for not letting her be caught napping and vowed she would never forget the loyalty and support of the Billy Bears.

Would you like to know how it happened that the Billy Bears came to be living today in the ancient oak trees of Windsor Forest? Almost one hundred years after Princess Elizabeth was proclaimed Good Queen Bess the Billy Bears once again managed to leave a large sticky paw print on the pages of history and this time come to the rescue of a runaway king. 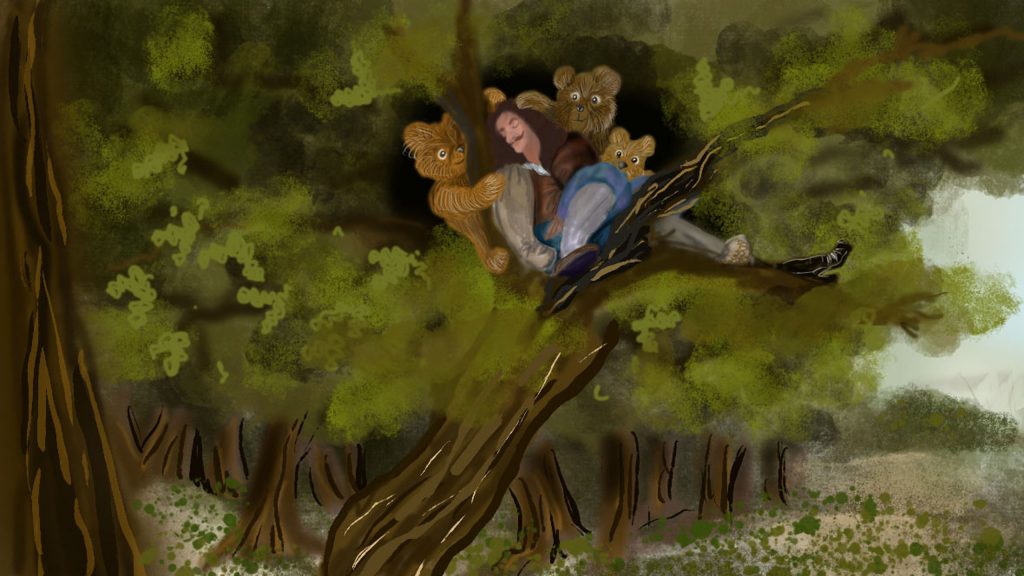 Do you remember the story of the very first Billy Bear who sailed from France with William the Conqueror in 1066? The ancestral branch of his family was called Gifford (chubby cheeks!) and they had settled in the oak trees of Boscobel House in Shropshire and were leading a very quiet and happy life eating their acorns and enjoying life.

Nothing seemed to happen out of the ordinary, that is until the night of 6 September 1651.  The Billy Bears were just settling down to an early supper of acorn soup with freshly made acorn bread when they heard a scuffling noise and felt somebody climbing the branches into their tree.  It was a very tall, but shabbily dressed man with long dark hair and a distinguished moustache.  He was a little taken aback when he peered through the branches and found a group of little furry bears huddled together with their bright, beady eyes and shiny noses, but he smiled and asked them for their help.  He told them that he had just fought a great battle, but it had not gone well, and he was running away trying to escape the soldiers who were trying to capture him.  Would the Billy Bears help him to hide?

He was so tired, and his boots hurt his feet, as in his rush to find a disguise the only boots available were two sizes too small!  The little bears felt that there was something special about this mysterious man, and they thought he had a kind face.  They helped him up into the branches of their oak tree and set about reviving him with some of their favourite food, including warm acorn coffee and hot toasted honey sandwiches made with their very own crusty acorn bread.  He was so hungry he ate everything up, and gradually his eyes began to close, and he settled back amongst the bears and fell asleep.  He felt safe among the Billy Bears and it was the first restful sleep our mysterious stranger had enjoyed for days! 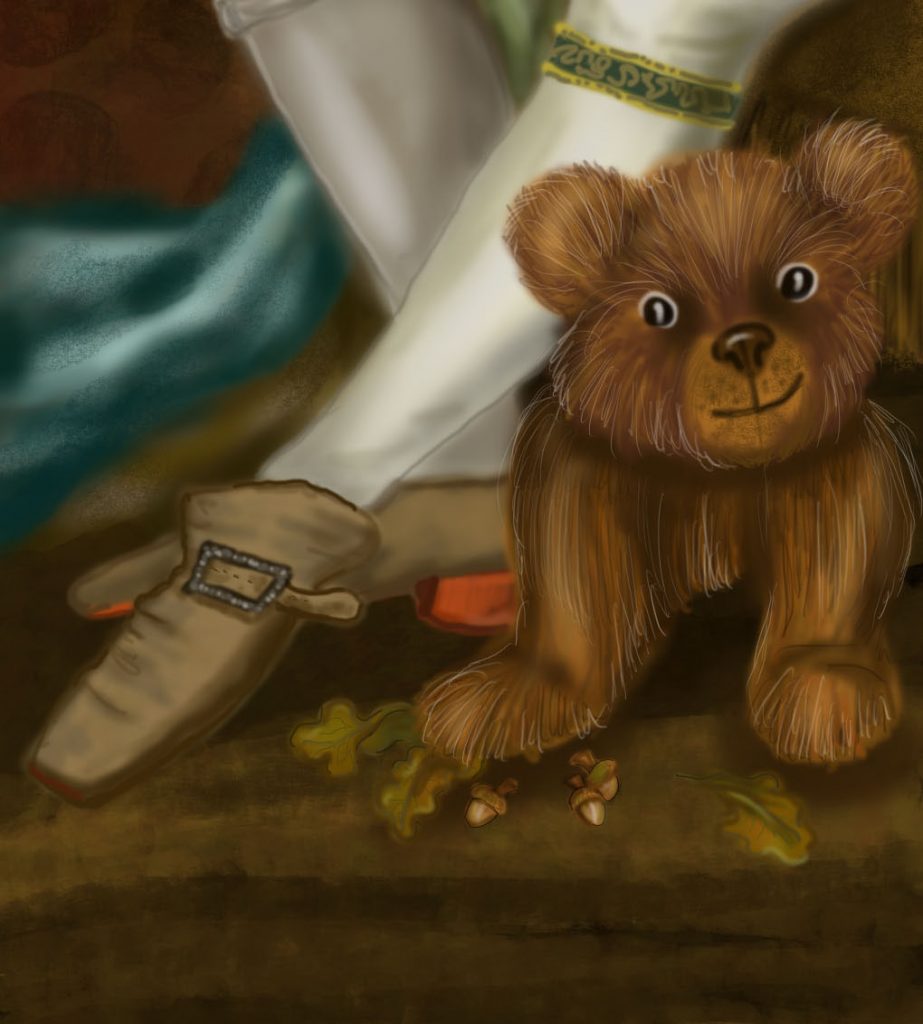 As the sun rose in the morning, the Billy Bears woke the stranger, and he climbed down from the tree ready to continue his journey and escape to safety.  He thanked the little bears and said he would never forget their loyalty and if he should be lucky enough to one day return and take up his rightful position, he promised to reward their kindness and protection.  They Billy Bears watched him run away across the fields and hoped that he would be safe.  They didn’t hear anything else for almost 12 years, but one day a herald arrived in their wood and with great ceremony he nailed a Royal Proclamation to their tree.  As they read it, the little Bears couldn’t believe their eyes!  It announced that the Billy Bears of Boscobel Oak were to be the honoured guests of the new King, Charles II who had just returned to claim his throne, and that they were to be given the Freedom of Windsor Great Park in recognition of their loyalty and support to the King many years ago, at a time when he needed their protection the most.

That is how The Billy Bears came to make their home in Windsor Park, and if you are pure of heart and look very closely you may be lucky enough to catch a glimpse of them in the hidden homes, up in the branches of the ancient oak trees at the heart of the forest.